Check out this great image of Henry Cavil as Superman in the upcoming Man of Steel reboot. 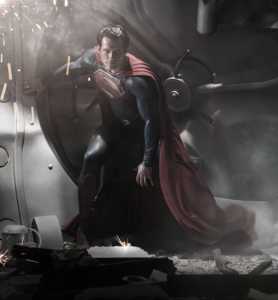 Its like they took everything about the Superman returns suit and made it work. The colors are muted but it seems to fit into the environment. Most of Zack Snyers movies have an overall color scheme so everything is tinted to blend together. So even the toned down color of the the costume seems to fit with the background of this photo. It gives the whole image a graphic feel, like a vintage photograph. The S shield is raised and textured but it’s larger. The larger S makes his chest look bigger which in effect makes Superman seem stronger. The texture on the rest of the costume looks metallic.  The Returns suit looked plasticy and non tactile. Here the metal sheen brings out notes of his alien heritage, and despite the  retro quality of the overall image it implies a future tone.  The cape… Wow.  Is longer and softer than previous incarnations for an overall  epic appearance, just as it should. My friend Sam mentioned after seeing Thor that they should do Superman’s cape in a similar way. Maybe the designers herd him because it has the same folds around the sholders.

Superman’s belt looks like its made of some type of gold metal. I always wondered why they never did this before. There was never any reason to have the  Man of Steel Wear a cheesy yellow belt which looked liked a child’s plastic toy. Gold is more respectable. I can’t tell for certain but it looks like there are no little red shorts. I know the comic is doing away with them with the DCnU reboot, I guess this movie is following suit. I know its supposed to resemble a circus strongman but the entire costume here is a totally different look. Getting rid of the red codpiece is definitely a good choice.

Superman is missing his trademark spit curl. It’s a silly design element but a fun one none the less. Lois and Clark the New Adventures of Superman always made Clark have natural softer hair and Superman have a slicked back look. The implication was that Clark was the real person and Superman was the act. Maybe that what they’re going for here. I’m still not sold on the texture on the shield. On the rest of the costume I like it but the shield is a coat of arms. It should pop out. The texture makes it blend in.

Good start! I cant wait to see this movie.