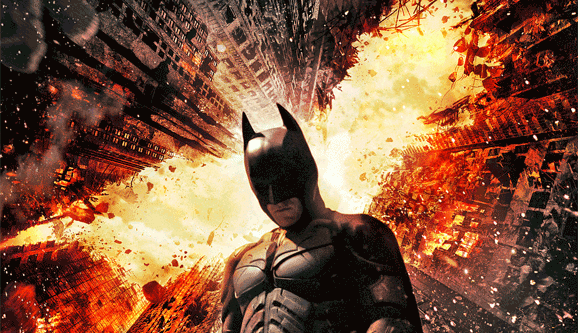 Batman Begins was a game changer for comic book movies, and started a trend of reboots which echoed through popular cinema. The Dark Knight set the bar for quality abnormally high with its superb acting, solid plot, and gripping drama. The Dark Knight Rises had huge shoes to fill. Was it the best comic film of all times like so many were expecting? From an objective standpoint, it probably had the deepest story line compared to the other comic based movies of the summer. However its ultra realism wasn’t as purely fun or generally satisfying as The Avengers or The Amazing Spider-Man. How did it compare to Batman Begins and The Dark Knight Rises? It was a fitting conclusion to Bruce Wayne’s story, but failed to reach the standards its predecessor set.

Picking up eight years after the conclusion of the Dark Knight, Bruce Wayne has become a recluse as Gotham City enjoys a period of peace and prosperity. Under the Dent Act, legislation which provides the government with extraordinary police powers, Gotham PD has all but eliminated organized crime. It is a peace that’s not meant to last as Ra’s al Ghul’s protege Bane prepares to carry out the League of Shadow’s mission to destroy Gotham City. Despite the wear and tear on his body, and the public belief that he is guilty of Harvey Dent’s murder, Batman is forced to come out of hiding to confront Bane.

The Dark Knight Rises lifts elements from several famous Batman storylines including Knightfall, No Man’s Land, and The Dark Knight Returns. As a result it becomes something else entirely. Ultimately TDKR is a film about hope. The story of Batman is always one of survival in the face of madness. As the end of this Batman saga the question asked and answered by this film is: Will Bruce Wayne have a future after Batman? In plot structure it strongly resembles the Batman Begins. A decidedly unstable and self destructive Bruce Wayne  goes through several stages of training, to reinvent himself to prevent a villain from destroying Gotham. He consequently saves himself. It’s a standard death/rebirth plot. It was different enough to be entertaining but echoed too strongly of Batman Begins. It lacked much of the colorful flare the previous films possessed.  Whereas Bruce Wayne’s hope in the first move came from becoming Batman, Bruce Wayne’s hope comes from moving beyond the limitations the Batman persona has forced upon him.  It’s not as satisfying as seeing Batman give up being Batman. It makes a good story, but the fantasy appeal of the Dark Knight is to believe in the valor of a hero. It could use a touch of levity or ridiculousness. It wasn’t as fun and therefore lost something in transition.

For a movie about Batman, The Dark Knight Rises spent a large amount of time on the ancillary characters. Bane felt and sounded like a dictator or guerrilla fighter. Though Tom Hardy provided a strong performance as Bane, and was able to convey significant emotion with half his face covered, he didn’t fall into the same level of ridiculousness Batman’s Rogues generally embrace. His enmity towards Batman felt forced.  Whereas the Scarecrow represented Batman’s fears, Ra’s al Ghul was the Dark Knights mentor, Two-Face was Batman’s shadow and a representation of his failure, and the Joker was obsessed with Batman as arch enimy, Bane’s connection to Batman  felt more like two opposing soldiers in a war. There was something unimaginative about the villain’s portrayal. Though I enjoyed how some of his rhetoric resembled the Occupy Wall Street movement. I don’t know if it was intentional on the part of the writers or if it was just a result of the nature of our time. Anne Hathaway did a respectable job as Selina Kyle/Catwoman.  She had the right attitude and her story arch fit nicely with the plot. I enjoyed the underlying sexual tension that grew between her and Bruce Wayne. Though gorgeous in a skin tight cat suit her costume was still boring.  The movie could have benefited from expanding her role. Batman suddenly trusting her felt obligatory. Another scene could have expanded the believability. Morgan Freeman, Gary Oldman, and Michael Caine all brought their A game but the standout performance was Joseph Gordon-Levitt as John Blake, an original character. Though the hero of the film has to be Batman, Blake seemed to represent the best of what could be in store for Gotham. He rose up from being a troubled youth to being the most incorruptible character in the film. He rose above being a violent street orphan and lacked the corruption even an honest policeman like Gordon had to deal with.

Overall I liked The Dark Knight Rises, but after its predecessors, and the competing comic book movies of the summer it wasn’t as good as it could be. Perhaps the movie tried too hard to make things ultra realistic and as a result elements of the film came off as uninspired. Judging in a vacuum it was a decent above average film, and concluded the story nicely.