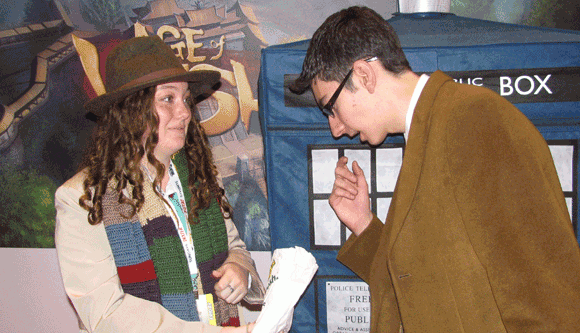 As I’ve said before I am a newly minted Doctor Who fan. At my first ever Comic Con I was nice to see a gathering of Whovians in such a strong force. There were fezzes, bow ties, 3-D glasses, and plenty of  sonic screwdrivers. The one prop that I got a kick out of the most was a cloth and wire pop up TARDIS. It was pretty funny seeing a doctor carry around a whole Police Public Call Box on his shoulder. 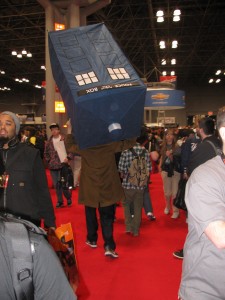 I came to one particularly enterprising 10th doctor who set up his TARDIS in a small intersection and began putting on a show. He was giving his best impersonation of the Doctor # 10 and it was only helped by his strong resemblance to David Tennant. Then a girl in a hat and an absurdly long scarf joined him and offered him a jelly baby. It was a great photo opportunity and half a dozen people began snapping pictures.

“You’re crossing over your own timeline. How come you haven’t torn a hole in the universe?” I shouted to appropriate laughter.

“You’d be surprised how often I cross over my own time stream at comic con.” the Doctor joked back.

Then  a scrawny guy with thick rimmed glasses popped up next to me.

“Didn’t you see the episode where the 5th doctor met the 10th Doctor?” he critiqued. Of course I had. This kid was refering “Time Crash” the episode where the TARDIS crashes into itself. The episode was a fundraiser for Children in Need. Peter Davison reprise his role alongside David Tennant. It was cute and funny. A scene which is made all the funnier because David Tennant modeled his Dr. Who after Davison, and even ended up marrying his daughter.

So yea I knew it was entirely possible that the Doctor could meet himself. Obviously I wasn’t serious.

“I was only joking.”I shrugged to the skinny kid.

“It happened and the two TARIDSs merged and aged the 5th Doctor.” He recited the facts of the short skit.

“I saw the episode. I was just hoping the guy would respond ‘timey wimey wibbly wobbly.’”

“You mean, ‘Wibbly Wobbly Timey Wimey… Stuff.’” He corrected me.

“Whatever guy.” I rolled my eyes

“Did you know the 11th Doctor was here yesterday.”

“No Shit! Thats awesome.” I laughed “Thats so cool you got to see Matt Smith. Did you get his autograph?” I wouldn’t be surprised if they had some of the Doctor Who people here. I’m not an autograph collector but it would still be neat to meet one of those actors in person. I once randomly met Dennis Haskins, aka Mr Belding of Saved by the Bell fame at a bar. Not that I particularly care about the actor of the show, but it was still a story to tell.

“Oh it wasn’t the actor. It was someone in costume.” the skinny kid elaborated. I looked to my left then to my right and Beside the 4th and 10th doctor there easily another dozen some odd Doctors within my line of sight.  “Can you believe the other Doctor was here?”

Someone was taking the cosplayers entirely too seriously. Sigh… only at comic con I suppose.