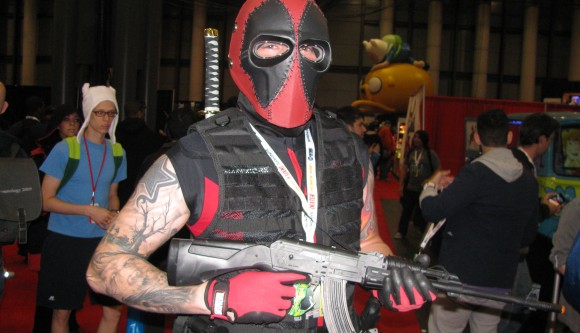 As a newcomer to the 2012 NY Comic Con I was surprised how many Deadpools there were out there. I figured cosplayers would follow the same rules as Halloween: Whatever was popular in the last year would be the most frequently appearing costume. When the Dark Knight originally came out there were more Jokers than I could count. For JJ Abrams Star Trek reboot in 2009 it became in vogue to wear a  primary colored shirt with a delta emblem. So at NY Comic Con I expected there to be a lot of Spider-Men, Avengers, Batmen, and Banes, and there were. Deadpool by far outnumbered all of them. It reminded me of the story arch where Deadpool travels to different universes and assembles a Deadpool Corps. It’s pretty impressive for the Merc with a Mouth, particularly because his only movie credit is as a stitched mouth Barrakapool. 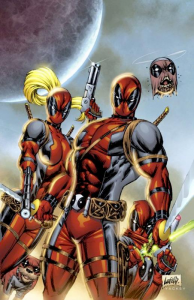 So Why am I bringing this up? Because one Deadpool rose above the rest, and if they ever get around to making a Deadpool movie Fox should take notes from this cosplayer. 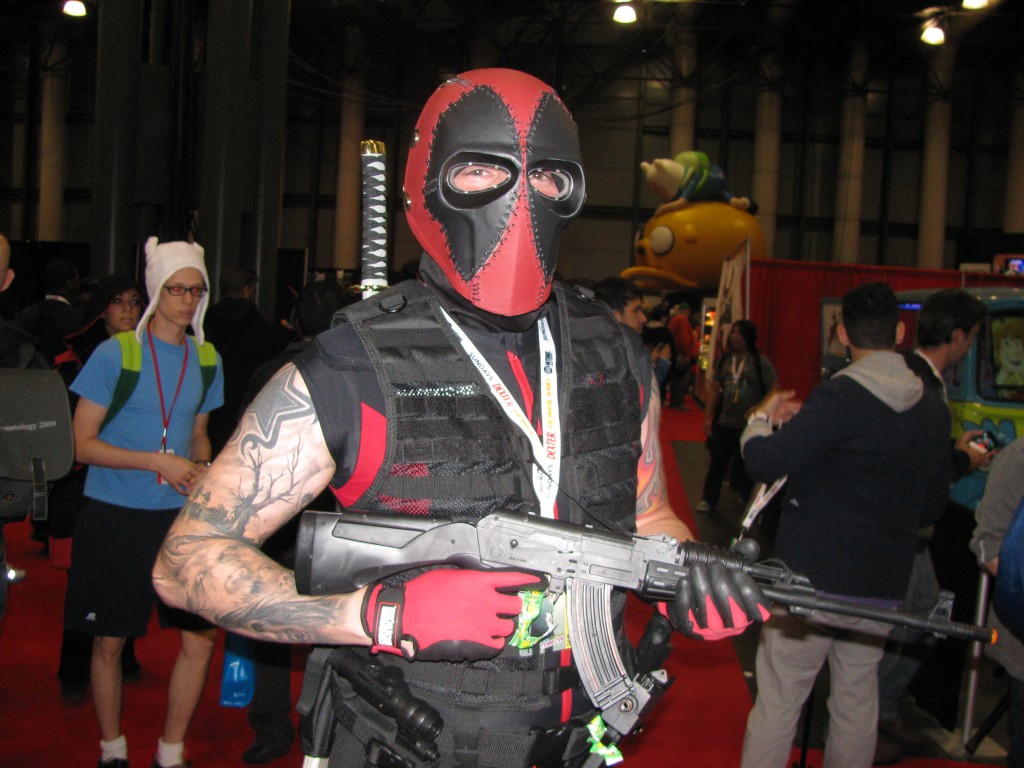 In retrospect I should have gotten this guy’s name, and given him a shout out in this article. If you come across it via magic of the interwebs let me know and I’ll give credit where credit is due.

So why did I like this costume so much? It’s very cinematic. Besides having a real sword, prop quality gun, and an actual combat vest, the cosplayer adapted elements nicely. Spandex and capes don’t always translate well to real life without looking childish. What pops in graphic form doesn’t always make it to 3D. Instead of wearing a red and black morphsuit this guy wore a red and black vest and gloves emulating Deadpools coloring. The mask is the strongest part and consequently what sold me on the costume. Instead of a read stretch mask its a red leather helmet. Bolted straps hold it on in the back. The black areas are other pieces of leather roughly stitched together, which jive well with the character’s sanity. It give the who costume a touch of an S&M quality, without going extreme. For a character who can be hurt but always heals instantaneously it works.  If this guy did this on his own, imagine what a major studio could do with a million dollar budget altering this concept.