Questionable casting choices aside, the Fantastic Four movie could have been something special. Instead they mailed it in. Often a superhero movie is measured by the bad guy and the two Fantastic 4 movies biggest  disappointment was Doctor Doom. I would argue that Doom is the greatest villain in marvel comics, if not comics as a whole. He is a dark wizard and a mad scientist. He rules a country as a despotic tyrant, and wants to take over the world to make it a better place. Doom is totally unapologetic about who and what he is, yet maintains a degree of honor. His hubris is always his downfall, which ultimately renders him a tragic character. None of this translated into film. Instead we got a cheap knock off of the Green Goblin in the first Spider-Man film. So how would I make Doom in film? I would turn to the Emperor Doom story line.

Though Emperor Doom,  is an Avengers story it could translate easily into  a Fantastic Four film. In the graphic novel  the doctor takes over the planet via mind control. He uses the Purple Man, a lavender colored villain who has the  creepy ability to subdue someone’s will on command. Doctor Doom captures purply and shoves him into a broadcaster  to brainwash the planet. It shows one of the most bad ass scenes in all of comics where Doom removes his mask and proves his will is too strong to be controlled.  Within months Earth is turned into utopia, granted a utopia without freedom, but a utopia none the less. Only one person has freedom, Wonder Man. Apparently he was placed in stasis because of injuries sustained before Doom rose to power. Awakening in the brave new world Wonder Man has to rally the avengers to against Doom and free the world. Eventually Doom decides world peace is boring and gives it back to either earn it through conquest, or gain rulership fairly.

If we swap out Wonder Man for The Thing and replace the Avengers for the rest of the Fantastic 4 the movie falls into place. Doom’s world could be a place free from poverty or war but free thought is repressed. Maybe we could see a world similar to what was depicted in Equilibrium. Any time people start to get individual thoughts they would be captured by Doom’s secret police and reeducated. Doctor Doom has always been a character motivated by ego. His obsession with the F4 is motivated by his desire to be right. Instead of killing the Fantastic Four he would remake them in his image. Johnny Storm  could be leader of the secret police. Reed would be dooms pet scientist kept around to be proven wrong. Maybe Susan Storm would be his vice  chancellor. All three are dooms pawns but keep showing glimmers of independent thought. Dr Doom would become bored. Sure he has everything he’s always wanted, but what’s the use in ruling humanity without their spirit. The Thing would wake up in this world and try to fight it. He’d want freedom more than anything else. He would eventually have to rally his family members again Doctor Doom inspiring their freedom. Maybe the Thing’s will is as strong as Doom’s and that’s why he wasn’t controlled. After being beaten in combat Doom would  be inspired. Despite being mind controlled the Fantastic Four were able to do amazing things. Doom would release the world because he was bored, but because he wants to humanity to prove itself worthy to be ruled.  He’d realize by making the world better he’d made it worse.

The Doom we saw in the movies was not a grand mastermind, or a genius dictator. He was a petty vain jerk out for revenge. Granted those are part of what 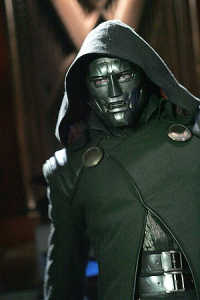 makes Doctor Doom a great but there are so many more facets to his villainy. The Emperor Doom storyline would give us the Doom we’d all like to see, not a Green Goblin rip off.