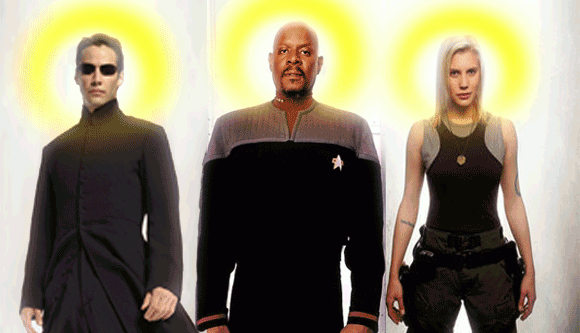 Religion occupies a strange place in science fiction. Good sci-fi often ask the audience the same questions raised by religious concepts, and can be used as a lens to examine and interpret religion. Why are we here? What is the reason for living? What is the value of a life? How do we define right and wrong? are all hard questions with no definitive answers. However all too often when religion is a major theme in science fiction it causes the storyline to veer away from sci-fi and into straight fantasy. When this happens these questions can be answered simple “cause God said so” or “Its space magic.” The of the most explicit examples are The Matrix Trilogy, Star Trek: Deep Space Nine’s conclusion, and the finale of Battlestar Galactica.

The Matrix films’ protagonist was Thomas Anderson, aka Neo. He was an ordinary hacker until he learned that his whole world was an elaborate virtual reality simulation created by machines to control humanity. Neo escapes the Matrix to the last human city Zion and learns that he is “The One”, a human capable of rewriting the Matrix as he sees fit. There is a large amount of messianic symbolism surrounding Neo, with strong influences of Jesus and Budda to the character. By fighting the machines and freeing its slaves Neo preaches a gospel of freedom. He is anointed and guided by an Oracle. People revere him as a savior. Apparently he has been reincarnated several times to save humanity. Within the context of The Matrix, this is explained as part of a master control program. The Machines are powerful enough to calculate nearly everything including cycles creation and destruction of the Matrix, and Zion. In such a large system one variable represents the element of free will. That variable is Neo. His mind is powerful enough to think outside of the control system. On one hand there is nothing overtly supernatural about Neo. He is a human with a particularly adaptable mind. On the other hand who’s to say that some other higher power isn’t working through Neo for the betterment and salvation of mankind?  The belief that he is some sort of godly being as the One makes for a fascinating exploration of messianic archetype. No definitive answer can be given about god’s relation to mankind in the story, because none can be given in real life. Is god real? Is this his servant? Its a matter of belief. It’s faith seeking understanding. Then the cliffhanger at the end of the Matrix Reloaded ruins what was a beautifully constructed representation of a messianic figure. Neo is able to use his powers to alter reality outside of the Matrix. His shuts down machines by gazing at them. When his eye balls are burnt out of their sockets he can still see. The debate is over. The ambiguity of the character’s true nature is resolved. At no other point in the series did a character demonstrate magic powers. He is a messiah. End of story. By making the character something magical or supernatural it ruins the ability the story has to speak to the human condition. God can’t be given a solid yes or no answer, but the Matrix gives us a hard yes. This was a sci-fi story with a bit of depth, now its just a magic fantasy where super guy saves the world.

Of all the Treks, Star Trek: Deep Space Nine had one of the most solidly written storylines and heavily deals with faith and religion. Captain Benjamin Sisko is the commander of the Federation space station orbiting a war torn planet called Bajor. The Bajorans spent a several decades enslaved by another alien race. After liberating themselves the Bajorans are on the brink of civil war, and Sisko is tasked with helping to stabilize the planet. For lack of a better term salvation comes when Sisko discovers a stable wormhole to the other side of the galaxy. This makes Bajor a center for galactic politics and commerce. It helps unify their people, and improves the status of the planet significantly. To the Bajorans this wormhole is a divine sign. They call it the Celestial Temple, and the non corporeal aliens who created it are their gods known as “The Prophets”. For discovering the wormhole Sisko is considered a religious figure to the Bajorans. Within the context of Star Trek this isn’t that ridiculous. There are scores of aliens who exist as energy beings with advanced almost divine technology. The wormhole aliens actively have been involved in the development and protection of the Bajorans. The wormhole aliens exist outside of time, can time travel, change the past and predict the future. So who’s to say they aren’t the Prophets. For the overall story the status of the  divinity of the Prophet Aliens is unimportant.  What’s more important is that Deep Space Nine used this plot point to examine concepts of faith. They explore religion as both a good and a bad force in society. Storylines arise dealing with cults, and religious fundamentalism. One religious leader is able to bring about a lasting treaty martyring himself by continuing  with negotiations even though he was dying. His faith gave him the strength, resolve, and moral fortitude to have the greater good came first.  Another leader tried to use the religion to greedily appoint herself the unquestioned political leader of the planet, demonstration the corruption of faith. One episode even dealt with religious figures trying to close down a school for teaching that  the Prophets where aliens not gods, with strong echoes of the evolution vs creationism debate. DS9 did a wonderful job discussing contemporary issues surrounding the church, through the lense of a science fiction, until the finale. It turns out that the Prophets engineered Sisko’s birth, so that he would be able to help them when they needed him. There’s nothing wrong with this in the storyline of Star Trek because it involves time travel and predestination paradoxes, sci-fi elements established to exist and used regularly in the show. So what is Sisko’s great destiny? The Prophets need him to stop one of the recurring villains from releasing the fallen Prophets. The imagery employed is the messiah has to stop the anti-christ from opening the gates of hell and destroying heaven. There still is nothing particularly wrong with story. It’s still firmly based in the science and story established. What is the method Sisko uses to stop the villainous anti-christ wanna be? The villain possesses a book of evil knowledge. When magic words are read aloud from it, it releases the evil. Sisko has to destroy it. This makes no sense for the Star Trek universe. When the story has explored real world issues with a sci fi interpretation of mystical ideas, a purely mystical conclusion devalues everything. All the delicate exploration of religious vs. scientific knowledge in society is no longer relevant. The gods make magic. The universe does not have to follow any science. Even the symbolism of burning a book speaks volumes about devaluing knowledge. Deep Space Nine bent over backwards to show the many shades of gray in the moral spectrum and the great climax is a simple angel defeats the demon story. They didn’t even provide a technobabble explanation as to why the the ending seemed magical.

The Battlestar Galactica reboot of 2004 told the story of a fleet of spaceships looking for a new planet to colonize after their home was wiped out by sentient machines they created called the Cylons. Religion played heavily into the series. The colonials were polytheistic worshiping something very similar to the greco-roman pantheon. The Cylons revered one god which resembled the Judeo-Christian God. The president rallied people behind her by telling them she was being guided by an ancient prophecy. Several characters see invisible people guiding and influencing their actions. These imaginary characters were strongly implied to be angels. Destiny, and a grand divine plan is evidently unfolding, and the characters are all bit players in a larger story.  Much like DS9 Battlestar Galactica, explored the issue surrounding religious conflict and the nature of faith. Unlike the Matrix, and Deep Space 9, BSG’s narrative acknowledges much more firmly  that there is a higher divine power at work. Though many characters are skeptical, the believer’s faith tends to sway the audience. Still there is a degree of mystery about what the greater power is. What is looked upon as providence could only be luck. Divine punishment might just bad circumstances. The leaders who claim to be talking to angels, or instruments of prophecy could be liars, or insane. It all functions within the context of the story. If God or the gods are at work  they’re working through the pieces they have established on the board. Until Starbuck rises from the grave.  Kara “Starbuck” Thrace is a hotshot fighter pilot, and one of the main heroes of the series. One of the cylons believes she is some type of emissary of God. One episode has her hallucinate which causes her to fly her fighter  into a storm on a gas giant. Several episodes later she returns unexplained, light years from where she died. Her instincts drive the plot through the rest of the series, and eventually leads the fleet to Earth. After everyone is given a happy ending she simply disappears. Kara’s resurrection and her deliverance of the fleet turns her into a deus ex machina.  Whereas the rest of the prophets and angels are God working through people, and making them solve their problems  through their own choices, Kara delivers them. It’s the equivalent of Moses parting the Red Sea. It forces a magic miracle where none existed before. Battlestar Galactica always made the characters choices and the consequences thereof very important. It’s as though God got tired and decided to bail them out by returning Starbuck.

The conclusion that  The Matrix,  Star Trek: Deep Space Nine, and Battlestar Galactica bring about is that God and faith are tangible things. Whatever the Divine is, it takes an active role in these universes. Human decisions, free will, and the very choice to believe or not is taken away by God directly influencing these stories. Science fiction should be a way to explore the human condition through speculative science (even if it uses aliens and living computers to do so). Faith is a huge part of the human condition but is something of the mind, heart, and soul, in the real world. Its not a literal magic that provides superpowers and deus ex machinas. It can guide and strengthen the human spirit, or it corrupt it and lead it astray.  For these films faith is fact, and thus believing and all the virtues and dangers surrounding it are null and void. To portray religion and holy figures in this sense muddles the story and changes its genre and meaning. We might as well be dealing with wizards and dragons.