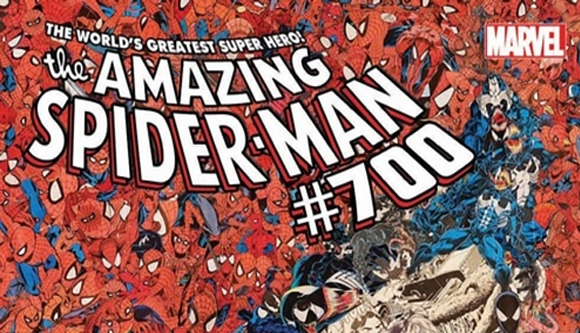 Like many people out there I can safely say that Spider-Man is at the top of my list of greatest superheroes. Peter Parker’s journey from a meek nerdy loser to self assured adult superhero is an elemental myth in pop culture. Since Amazing Fantasy #15  Spidey has had a good solid 50 years of saving NYC and the world. As of Amazing Spider-Man #700 Peter Parker is no more, defeated by his longtime nemesis Doctor Octopus. 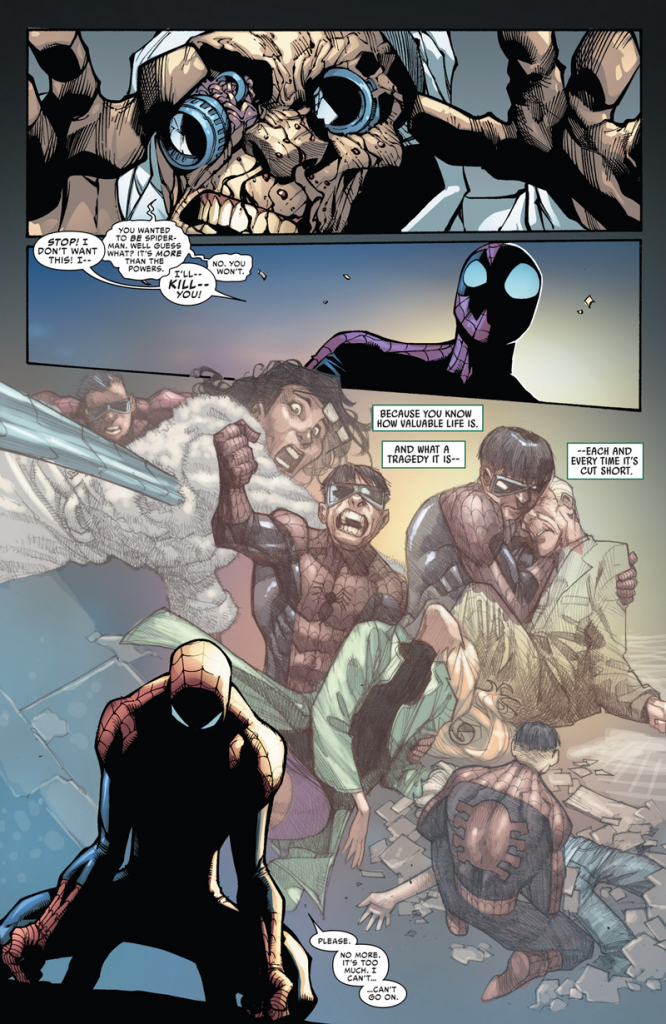 For those unfamiliar with the story, years of abuse and defeat have taken a toll on Doc Ock’s body. Wanting to make his mark on the world before he dies Ock sets a master plan in motion which would have destroyed the world. Of course Spider-Man stops him, but in the final move Octavius switches minds with Peter Parker. Essentially Spider-Man is trapped in a dying body as Ock has free reign to cause chaos in the hero’s place. It’s a fairly standard sci-fi/fantasy storyline until the very end. Peter Parker loses. Ock’s body dies, with Parker’s mind in it. In his last moments Otto Octavius gains access to all of Peter’s memories, and the sentiments attached to them. He realizes how hard Spider-Man’s life has been and comes to realize how much he has wasted his own life on villany. He vows to make up for it with by carrying on in the hero’s legacy, live by the Ethos “With Great Power Comes Great Responsibility” and continue to be Spider-Man… a Superior Spider-Man.

The death of a superhero is generally a non- event. So many escape death that I have no doubt that the original Spider-Man will be back in a year or two. Maybe less. In the meantime Marvel has put a new spin on the death and resurrection story, by tying a redemption angle into it. When Superman died it was the perfect example of the 1990’s trend in comics to make all things extreme!!!!1! It was gratuitous and gimmicky. Here, the death of Spider-man ends with a note of guarded hope. Doctor Octopus has the potential to turn his life around. Spider-Man could have killed him or left him for dead when he tried to destroy the world. Instead Peter stuck to his guns and did the right thing even though it came back to hurt him. One of the aspects of the Spider-Man myth is that he has an original sin to atone for, namely the death of Uncle Ben. With Ock as the new Spider-Man Octavius has an original sin of his own;  he has destroyed the world’s greatest superhero. Ock has great deal of hubris about him and though he is trying to be good he still thinks he can be a superior hero. Though I’m sure there will be a fair amount of complaining about this turn of events on the internet, this story has so much potential. Will Ock truly become good? Will he give into the temptation of taking advantage of his new identity, or honestly be repentant? Will Peter’s friends and relatives notice a difference? What happens to Peter’s soul in death? Spider-Man’s story is always about guilt and redemption. Can a villain truly learn this lesson.

I haven’t been able to get into Spider-Man since the “Sins Past” storyline, and the “One More Day” arc was the nail in the coffin. Ironically after years of figuratively killing Spider-Man, by literally doing it Marvel may be getting back to the thematic core of the character. If nothing else there is alot of story potential for this. 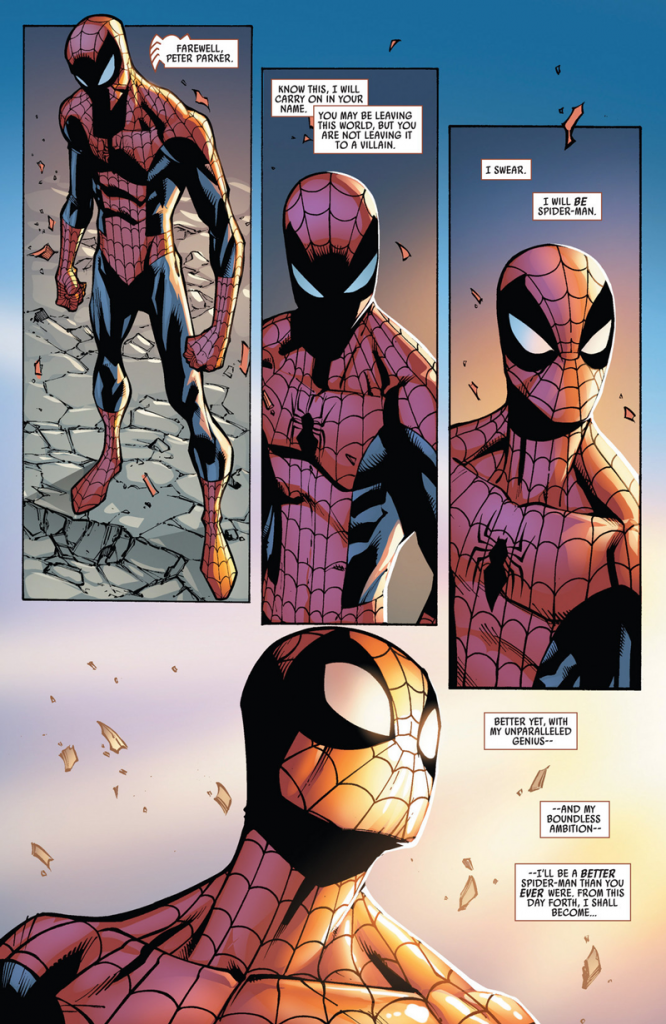