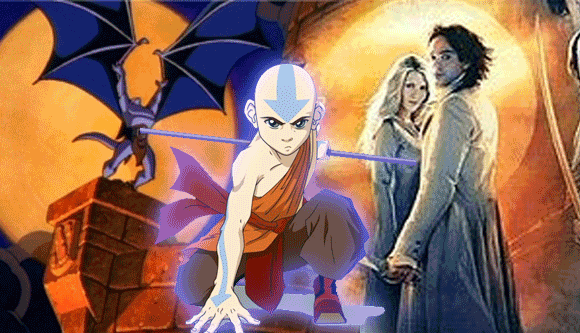 By publishing the Hobbit and the Lord of the Rings J.R.R. Tolkien created an epic fantasy world of elves, dwarves, dragons, and wizards. That type of fantasy captured popular imagination and has been replicated throughout culture. Some of the most popular examples are Dungeons and Dragons, and World of Warcraft. Fantasy is an expansive genre and is meant to be as imaginative as possible. A Tolkienesque world shouldn’t be the only type out there. What are some good examples of different non Tolkienesque fantasy worlds, with unique magic, settings, and creatures?

Avatar: The Last Air Bender and Legend of Korra
The world of Avatar is a conflicted realm divided into four kingdoms centered around the 4 primal elements. Like wise magic in this fantasy world is connected to the four elements as well. No wizards appear in the series. Instead they are replaced with  benders. Based on an individual’s spirituality and the nation of their birth certain people to control  or bend the elements. The Avatar is the only one who can control all four elements. Its his/her job to maintain harmony, and is thus reincarnated in manner similar to the Dalai Llama. What makes Avatar’s world so unique is that there are very few elements of western culture. The design, spirituality and culture of the four nations are heavily influenced by chinese, japanese, and inuit society. Most creatures that appear are a blend of two or more animals. The original series, The Last Air Bender,  takes place in a time period emerging from feudal society. Some slightly more advanced technology emerges including steam punk tanks, and dirigibles. The Legend of Korra takes place decades after The Last  Air Bender. The world has developed to be reminiscent of the 1920s, creating a very interesting blend of fantasy concepts. The culture, design, magic and animals make the world of Avatar a very interesting place for the heroes to fight evil, and have adventures.

Gargoyles
When it comes to sentient non human species, we see along of orcs, goblins, elves, and dwarves. The titular gargoyles of the the 1990’s animated series are something different. Based on the statues that adorned old buildings and cathedrals, the  gargoyles were a race winged humanoid warriors. They have great strength, and turn to stone during the day. The gargoyles strong protective instincts, lead them to be a natural guardians for human beings despite humans fear of them.  They exist during the dark ages in Scotland 994. That alone would have been a different enough fantasy series, but it takes up a notch when the Gargoyles are magically put into stone sleep and awaken in 1994 Manhattan. Becoming superheroes, in an urban fantasy world, the gargoyles deal with a Lex Luthor style billionaire named David Xanatos, the immortal Shakespearian King Macbeth, shapeshift magical tricksters. Besides the different non human creatures, Gargoyles seamlessly blends sci-fi and fantasy in an epic saga. It shows what happens when characters from a medieval fantasy comes to a modern world. It even features a castle on top of a sky scraper.

Stardust
Dozens of fantasies deal with characters that fall into a parallel world from the real world. A few are, the Wizard of Oz, Alice in Wonderland, Peter Pan, and the Chronicles of Narnia. Stardust was a 2007 film based on a Neil Gaiman novel. The British town of Wall sits next to a stone wall that is the border with the magical kingdom of Stormhold. The hero Tristan Thorne see a star fall on the other side of the wall. Hoping to impress the girl of his dreams Tristan journeys into Stormhold looking for the star.  Stormhold features an array of interesting and quirky elements. It turns out that in Stormhold stars are radiant women whose hearts grant immortality.  Pirates in flying ships fish for lightning. Babylon candles grant the user the ability to transport anywhere they think of. When Tristan finds the star, a girl name Yvaine, he has to protect her from witches that wish to kill her and eat her heart. Stardust is a richly imaginative swashbuckling adventure.