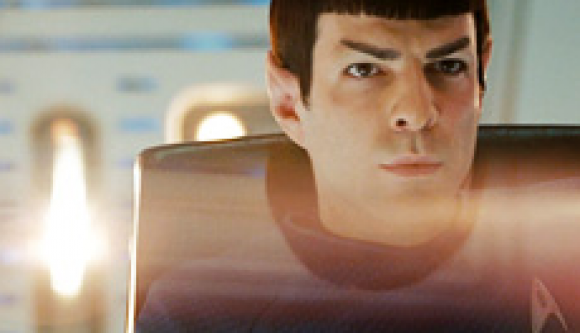 Both Fringe and Star Trek 2009 are J.J. Abrams’s projects. In many of his works Abrams uses the same visuals. Refrences are made to Slusho, a fictional drink, and  red floating balls frequently factor into the plot significantly. It makes sense a writers/director throws the same elements in there. Throughout all of Star Trek  the number 47 is frequently mentioned in dialog. This is a in joke done on part of the writers.  The Quentin Tarantino hides the same  fake advertisements  in the background of his movies and repeats the use of actors and names. Some have theorized every film he’s made is part of a giant shared universe. In many of M. Night Shyamayan’s films bright colors have significance.  Anytime something is right red, orange, or yellow it’s connected to something mysterious or supernatural, and can be used to telegraph the twist ending. So what does the lens flares mean? In Fringe the concept of parallel dimensions figures greatly until the main plot. Whenever a character travels from one Earth to another a lens flare is the special effect of choice. A lens flare flashes across the NYC skyline and suddenly the statue of liberty is bronze and the World Trade Center is still standing. In Star Trek Nero created a parallel universe via time travel. The original continuity exists but, everything from the final flight of the USS Kelvin is different. Instead of just simply trying to look futuristic and Sci fi, Abrams is telling us we’re in a completely different dimension. Fringe  only takes place on Earth(s), so we get only one flare when things are different. The Enterprise has the ability to go anywhere, and thus is a force which can alter  the whole universe. Every action the crew takes further develops the parallel dimension. Thus every direction you turn aboard the new Enterprise you see a flare. On one level its a over done, but nice looking visual, on another its cool symbolism.