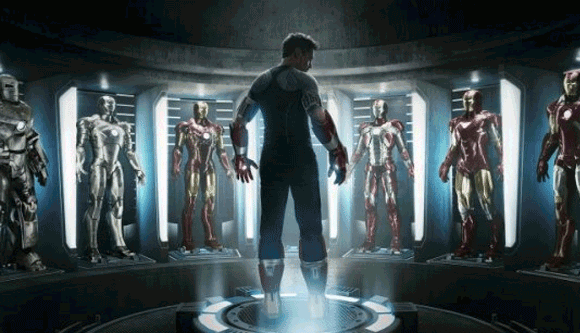 Iron Man has become the Godfather of Marvel comic book movies. Wait no. The Godfather was a trilogy with  a strong part one and two and a crappy third film. The metaphor is not apt! Iron Man 3 was a good film. Well now that I got my opinion out of the way, what I mean to say is that Iron Man is the patriarch off marvel cinema. The Avengers left some large shoes to fill, and old man Stark didn’t disappoint in his third installment.

Picking up some time after the Avengers, Iron Man 3 starts with a dramatic shot of the old armors exploding, while Robert Downey Jr. narrates. My immediate reaction was that this felt exactly like Kiss Kiss Bang Bang. Seeing as Iron Man 3 and KKBB share the same star and director its not surprise. Tony is dealing with Post Traumatic Stress by building dozens of suits of armor. A new international terrorist  threat in the form of the Mandarin arises.  Throw techno-organic soldiers into the mix the stakes are set high.

Based off the Extremis storyline from the comics Iron Man 3 felt less like a superhero movie and more like an action conspiracy thriller. I’d say is good thing. I was reminded of certain Bond films and episodes of 24.  In the comics the Extremis story was an important one. In addition to exploring some interesting post humanism concepts, and fleshing out Tony Stark’s personal demons, the Extremis story also set the tone for Iron Man stories  for years to come. It was great to see elements of it come to life on the screen. Iron Man fits well into a world of corporate military industrial intrigue. Rather than go with a more traditional superhero set up this knew what its sandbox was and had a good time playing it. It was great seeing the extremis process in live action. Though it was streamlined the extremis soldier looked awesome. The semi transparent tencho-organic glowing was a nice visualization of the superhuman powers. An added bonus was the bad guys weren’t just people in armor. After Iron Man 2 that got boring. As for the rest of cast of villains this was not what I was expecting. A lot of liberties were taken with the Mandarin and AIM. For spoilers sake I’ll discuss them in greater detail in another article, but those who’ve seen it know what i’m talking about though.  Usually I am a purist but the changes worked in the context of the film. The villains’ conspiracy was well thought out, and clever. Its almost the drastic re imagining  the Ultimate imprint would have tried.

The strongest aspect of this film was Robert Downey Jr’s performance. Tony Stark is considerably more mature and focused yet doesn’t lose any of the lighter hearted elements of the previous three films. The character’s has shown  considerable growth and is wildly entertaining to watch. Iron man 3 features a lot more comedy than it’s predecessor. A great deal of it is black humor, Which RDJ pulls off brilliantly. There were enough odd characters for stark to bounce off of from the extremis henchmen, to the kid Harley, to the Mandarin.

That’s not to say this was a perfect film. The character of Dr. Maya Hansen played by Rebecca Hall was underdeveloped. Her presence feels obligatory and minimal as thou she is the remnant of a earlier draft of the script. There are some logical questions to ask like why didn’t Tony call the Avengers.   Yet despite all the negatives, this movie shines. If this is the last Iron Man film it went out on a high note. If not Iron Man 4 has some even bigger shoes to fill.