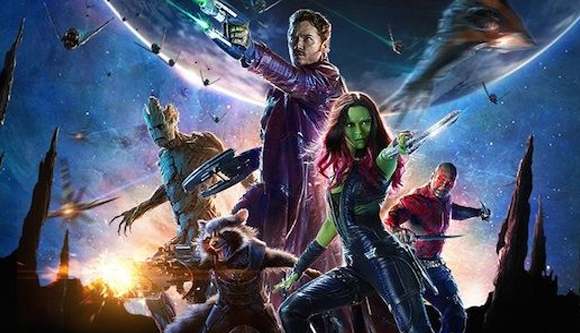 As a big comic book nerd, I knew of the Guardians of the Galaxy. I knew that there were characters that included a talking racoon, and an alien tree man. I knew leader of the team was Starlord. I knew that they were space adventurers that saved the universe. But thats it.

In a time where so many big blockbusters seem to be preordained by the amount of mental real estate they have in the general populace, this seemed like Marvel’s gamble. Hell, If I can’t tell you much about the comic you might be in trouble. I went into it with an open mind. Marvel can only adapt Ironman, Thor, The Hulk, and Captain America so many times. This was their chance to to show that any of their thousands of properties have great untapped potential. And boy did they deliver the goods.

Guardians of the Galaxy feature a team of unlikely heroes…criminals actually, who have the call to duty thrust upon them and have to save the universe from a mad man with a space weapon. Its a fairly standard sci-fi/fantasy/action movie set up but what makes it work so well is the depth of imagination that was thrown into it. Threads from all over the marvel universe were woven together to create a vivid tapestry. The aesthetics takes elements from Firefly, Cowboy Bebop, Star Wars and Star Trek. Aliens of every color size and shape appear in environments as pristine and cosmopolitan as the Nova homeworld Xandar, to the gritty outlaw town of Knowwhere.  The main characters are are all very likable, and very funny. Because they are just low life criminals we want to root for them all the more when they become heroes. People may scoff at a talking Racoon, but Rocket is the heart of the adventure. Not only is he the rendered in amazing CGI, but no other character evokes the same degree of Pathos in the entire film.

Though the film is great, its not all of it is perfect. The villains are by far the weakest element. Lee Pace as Ronan is so over the top and chews so much scenery that he is likeable as a cartoon. The other bad guys fade into the background. Though they all had striking visuals  Djimon Hounsou I felt was a particular waste as he was my personal fan favorite to play the Black Panther. The heroes, action and humor more than make up for it.

All In all this was a strong outing for Marvel’s experiment. It wasn’t the standard superhero fare. It was a spectacular space opera. It evoked what I high budget Flash Gordon film might be like. It was silly, awesome fun.