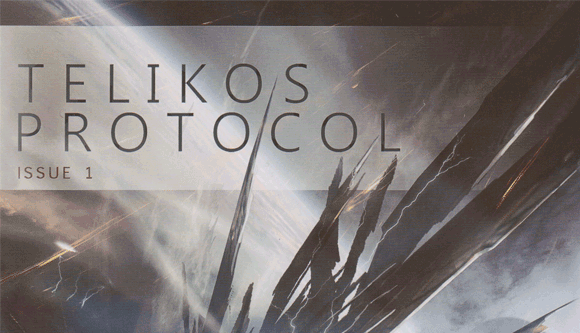 During the New York Comic Con I came a independent

Telkios Protocols tells the story of a future where the Earth is suffering from several ecological disasters. Humanity is on the brink of extinction. The vision of the future painted is a grim one. The world is overpopulated, and barely able to sustain its inhabitants. Cities are condensed into Blade Runner-esque megalopolises. Rail guns orbit the planet to fend off comets and meteors. Small details let you know how desperate the situation is. Beef is considered a luxury item, and in order to have a child a couple must file a birthing application. Research into a strange alien powersource might be humanity’s only chance at survival. Until a disaster occurs and something comes from outer space. 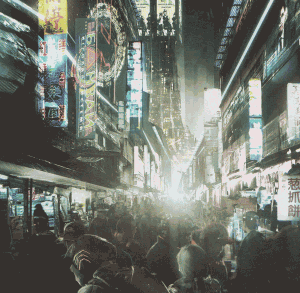 The first few pages of the comic set the scope and feel of what may be to come. We are introduced to a scientist working for E.D.G.E., a vague research and defense organization.  Involved in some mysterious research, and on the cusp of a major discovery his superiors demand to see him. The bodyguard sent to retrieve him starts to physically beat him as a sign of alpha male dominance. Though this scene of violence is random, and crude it lets you know how dark and desperate this future is. This is a very rough, borderline fascist world, barely holding it’s civility together. The darkness is then undercut when the reader is introduced to two other employees of E.D.G.E. Steve and Lily. Steve and Lily are also body guard/space marines, but are also a couple. They bring a bit of humanity into the mix. Their dialogue and affection seems genuine for each other.  Often in the gritty future portrayed in modern sci-fi, writers forget that people are still human beings. This lets the reader know that despite the difficulty of life there is hope for the species. They are recalled to the E.D.G.E. base when a threat from outer space approaches the Earth, and attacks the E.D.G.E. base

All in all the beginning of Telkios Protocols has a very cinematic feel to it. The artwork alone makes the

comic worth a look. It gives a detailed tactile feel of the dark future. The first issue is mostly a set up for what will follow as such, it shows great potential for a science fiction adventure.  It’s only flaw so far is that it ends rather abruptly. The story was probably written as one long graphic novel and broken into smaller pieces. It leaves the reader wanting to know what happens next.  Many questions are raised. What is the EDGE Base researching? How will it help humanity? What is attacking the Earth? And most thought provoking what will happen to Steve and Lilly in this whole mix?