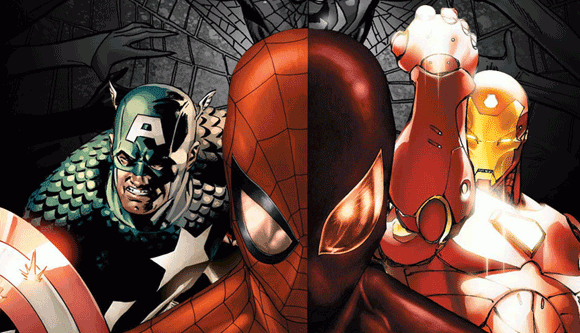 One of the most influential and successful of the recent l comic crossover events was 2006-2007’s Civil War by Marvel. When a group of young superheroes chasing a super villain cause an explosion which destroys an elementary school, the US Government decides to pass the Superhuman Registration Act. The SRA requires any individual with superpowers to register with the S.H.I.E.L.D. and government, and work as professional agents thereof. The major component is that heroes have to give up their secret identities. Captain America, feels this is a violation of human rights. Iron Man thinks this is the only way to protect the heroes from accidents that would inevitably occur. Like all reasonable human beings in a democratic society the only logical mediation of a philosophical/political difference is to rally together armies of superheroes and have a war.
With the Avengers becoming a huge success, and more superhero movies stepping up to bat, the Civil War has been tossed around as a potential sequel. I think this would make a horrible movie. I was never a fan of this story in the comics. It wasn’t a fun comic to read, and it was a hugely flawed concept.

Problem#1
Its too expansive:
As of the end of the Avengers film we have 6 major superheroes, and a handful more potential characters floating in the periphery. The Civil War comic had hundreds of characters fighting each other. The interesting thing about the comic series was that it split the Fantastic Four in half, the X-Men claimed neutrality, and Spider-Man became a turncoat, as Captain America and Iron Man rallied the heroes together.. Marvel studios doesn’t have rights to any of the other major franchises. Sure they can develop some B-listers, and include some more major characters like Black Panther, Ant Man, and Captain Marvel, a dozen or so heroes fighting isn’t a War. Its a skirmish.

Problem #2
It makes the characters unlikeable:
The Marvel cinematic universe owes alot to the first Iron Man movie. Robert Downey Jr. as Tony Stark practically blasts personality from his sonic repulsor gauntlet. Downey mainstreamed the hero and made him someone to root for. In the Civil War, Iron Man makes some seriously moral questionable decisions. At times he goes from being a well intentioned extremist to out and out villain territory. He creates a prison in another dimension for heroes who don’t register, and hold them without due process. He creates teams of super-villains controlled with nanites to hunt down the heroes call “Cape Killers”. The worst offense is that he takes part in creating a cybernetic clone of Thor, who kills one of the anti-registration heroes. None of these actions seem like Downey’s Stark would do. He anti authority, not a dictator. If they switched roles and Stark was Anti-Reg the Pro-Reg leader would have to be Chris Evan’s Captain America a character who is characterized as being good for good’s sake. 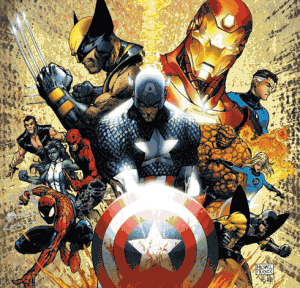 Problem #3
Its too political
Politics can make a comic book interesting. The X-Men’s entire struggle for equality is an echo of the civil rights movements. The Civil War had strong echoes of the political division of Bush Era America which were strongly influenced by the individual writers views. Without getting into my political views I can say with a fair amount of confidence that if i were to express them approximately 50% would agree, and 50% would disagree. Regardless of either side I would guess only the minority would be interested in a sincere intellectual debate of the concepts. The X-Men’s politics can be palpable to anyone and even persuasive because the story is a metaphorical. Civil War’s politics amounted to standing on a soap box. Many would cheer it, many would also be turned off by the blatant politics. Automatically that limits the audience.

Problem # 4
It ends with tragedy
The Civil War story comes to a conclusion when Captain America sees the destruction his army of anti-regulation heroes have on the city, realizes the Pro-Reg people were right, and surrenders. A few days later he is assassinated in a Jack Ruby style killing before he is made to stand trial for treason. Now of course this was a comic book and a continuing story. It was part of a larger saga. Often comic events set up the next chapter. Captain America was brought back from the dead. Movies don’t work the same way. Sometimes there’s a sequel, or a cliffhanger but the films need to give a sense of closure. Who the hell would want to see a movie where the righteous nice guy hero surrenders to the arrogant jackass borderline villain, and is then murdered.

Problem #5
Its basically a poor rehash of the first x-men movie
The first X-men movie dealt with the US Government debating a mutant registration act. Magneto was against this and was willing to raise an army of super-people and take them to extreme measures to try and prevent it. This was successful because it had echoes of Nazi Germany wanting to register Jews and other minorities for being different. Civil War lacks the same depth as its about a more morally ambiguous subject matter, freedom vs. security. Its a more delicate subject matter, who’s right and wrong isn’t as definitive. Making the characters act in the same exaggerated capacity makes them appear as needlessly violent, and stupid. 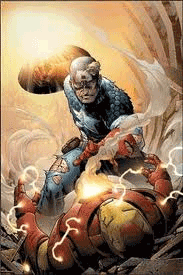 Problem #6
Its a flawed concept
The crux of the drama of the Civil War is the issue of taking away civil rights for security. The right that is taken away is the right to dress up in a costume and fight crime, under an assumed alias. Being a masked vigilante IS illegal. The Marvel Universe has thousands of characters, but save for the few that are secret agents, or sanctioned by the government, all are outlaws. The criminal justice system affords limited police power to govern the populace. At no point does it provide the individual with the right to take the law into their own hands. Centering an entire war around a non-existent right is poor storytelling.

Problem #7
It will overplay the trope heroes fight each other to settle their differences.

Though the Avengers film provided plenty of opportunities for the good guys to smash bad guys, most of the fights were between heroes. Thor, Captain America, and Iron Man had their three way battle. Black Widow fought Hawkeye. Thor battled the Hulk. Captain America repeatedly challenged Tony Stark to a fight in his armor. The Black Widow even had to deal with a rampaging Hulk. Within the context of the film the heroes fighting each other worked. A civil war doesn’t have room for heroes vs villains. It would overplay the inter team battles. It stops looking like a battle between good and evil and more like a case of domestic abuse. Aren’t superheroes supposed to fight bad guys anyway?