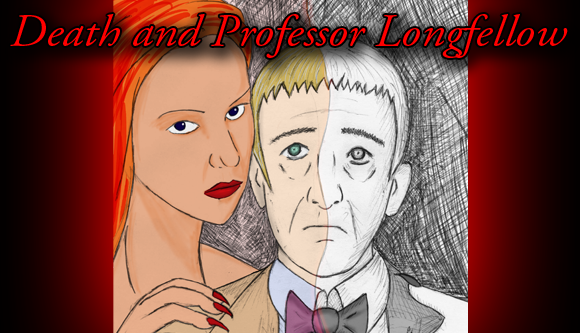 The idea for this Death and Professor Longfellow began while I was in high school, and has been bouncing around my brain since then. I used to watch a low budget science fiction adventure show called The Lost World. It was loosely based off the Arthur Conan Doyle book of the same name. The Lost World was about a group of explorers from the early 20th century who found a plateau which time had forgotten. Conceived as a land where dinosaurs still existed, the show quickly began involving stories with aliens and magic. It was silly and stupid but I enjoyed the weirdness, if for nothing else than brainless entertainment. I especially liked how seriously the show took itself. So what does my love for a grade Z sci-fi show have to do with Longfellow?  The titular professor would dismiss such a program as meaningless silliness.

There was an episode where one of the main characters, Major Lord John Richard Roxxon died. Death appeared to him as a beautiful woman trying to seduce him into giving up his life. The woman was attempting to convince him that he had nothing to live for.  I remember thinking it was the most unbelievable aspect of the show. I had no problem with the aliens, dinosaurs, time travel, magic, and what ever sci-fantasy debris was dumped into the plot.  The most unbelievable thing was that there was no conflict in this scenario. Roxxon had no reason to be tempted. Of Course he’d come back to life. The man was practically a stand in for Indiana Jones. He was robust and full of vigor. He had a girlfriend to go back in the land of the living. For him everday was an adventure that most people could only fantasize about. There was nothing heroic or gripping about him rejecting death. The young should reject death.

I said to myself “someone should rewrite this episode.” What would tempt a professional adventurer to die? As I said in my last article line from Peter Pan came to mind. “To die would be an awfully big adventure.” Even that wasn’t enough.  What if the hero struggling against death wasn’t a virile man in his prime, but an old man on his way out?  It made me think of the Dylan Thomas poem Do Not Go Gentle Into That Good Night, where someone with a youthful outlook is pleading with an older person to “rage, rage, rage against the dying of the light”. If an old man were truly hopeless, genuinely didn’t have a reason to fight for life, and then did so  anyway, that’d be a struggle with a bit of heroism to it.  Thus, a very nascent form Professor Robert Longfellow was born.

This was just another random idea in the slush pile in mind. I didn’t have a story, or  any real characters. Who could be my non-heroic, protagonist? The answer came to me in college. Being an aficionado of writing I took a number of literature classes. The most common thing discussed in the class wasn’t Shakespeare, Dickens, or Chaucer. It was how nobody did the reading the night before. It was a crime even an over achieving nerd like me was guilty of from time to time. It made my teachers and professors very exasperated. They were trying so hard and they just couldn’t seem to get through to us. Most just gave up. These professors  brought the idea inspired by  The Lost World back to mind. My unlikely hero should be a burnt out college professor. It took a few years to come together and actually write, but I knew who should be the one to challenge and overcome Death’s trials in my story. Not someone like Major Lord John Richard Roxxon, but Professor Robert Longfellow.

Death and Professor Longfellow is available for print and download on amazon.