Home » Articles » The Death of Zeus

Greek mythology is one of the cornerstones of western storytelling. The ancient Hellenic stories of the gods, mortals and demigods have survived thousands of years and been an inspiration to millions. As such, the stories have been adapted and reinterpreted for centuries. Greek myths are a staple of pop culture, and lately I’ve been noticing a recurring plot point in adaptations of Greek myths: The Death of Zeus.

The most widely known example is probably the God of War series. The protagonist Kratos main motivation is to kill Zeus. In The episode of Xena Warrior Princess “God Fearing Child” Hercules kills Zeus when the King of Olympus tries to kill Xena’s daughter. One might simply prescribe this to a narrative portrayal of the Oedipus Complex, as both Kratos and Hercules are Zeus’s children, but the trend doesn’t end there.  To name a few occurrences the Supernatural episode “Remember the Titans” has the Winchester Brothers encounter Prometheus, Artemis, and Zeus.  It ends with the King of Olympus dying. Marvel comics’s Ares: God of Wars series pits Olympus against a character from Japanese mythology named Amatsu-Mikaboshi. Zeus is slain in battle, is eventually resurrected only to die again in the pages of Incredible Hercules story arc “Assault on New Olympus”. Even the recent comic book series “God is Dead” Features the death of Zeus as a major facet of the old gods returning to Modern Earth. Unlike the Norse Ragnarok, there is no myth depicting the death of any of the Greek gods. Zeus overthrew his father Cronos, like Cronos overthrew Uranus before him but the cycle ended there. Despite his many many many children none of Zeus’s children took his throne.  With no basis in lore, why has this borderline cliche plot point become so prevalent?

Zeus was the god of the sky who reigned above everything thing else. In the ancient world justice came from the word of the one in power.  No one had more power than Zeus thus he was the god of justice, order, and rulership. The Greek Gods were supposed to be human with all the flaws and virtues entailed  therein.The King of Olympus was far from a paragon of virtue. He raped numerous woman, cheated on his wife left and right, abandoned his children, smote his enemies, and did whatever was necessary to ensure his rule endured. His actions were only justified because these were actions a ruler might carry out. No one could hold him responsible for his dalliances, and indiscretions, because no one was powerful enough. In the words of Mel Brooks “It’s good to be da king.”

This is a very old world view of rulership. Since the enlightenment, the general populous does not view a ruler as an unassailable source of power. Ideally a ruler should be  a servant of the people. His authority comes from a social contract between the government and the governed. In a modern point of view, Zeus may be the king who keeps the Titans and Giants confined the pits of Tartarus, but that doesn’t excuse him to taking the form of a woman’s husband and making love to her under false pretext. Maybe that is psychological reason why killing Zeus has become so prevalent in recent. In God of War, Xena Warrior Princess, Supernatural, God is Dead, and to a lesser extent, the Marvel Interpretation of Zeus, the fall of the King of the gods is justified in that his ruler ship is flawed. Marvel’s Zeus is resurrected after he is forced to confront all of his sins and acknowledge he is not above justice. When the King tries to kill an innocent to maintain his power, or causes suffering unfairly he is no longer a fit ruler. According to the idea of social contract as soon as a ruler (or government) violates his duty to the people, it is the responsibility of the people to overthrow that government, with violence if necessary.

Whether you identify with the Tea Party, or the Occupy Wall Street movement, we live a time where public decent against the ones in power is commonplace, accepted, and encouraged in a democratic society. We have mayors, presidents, congressmen, senators, prime ministers, judges, and the rest because we the people elect them.  The Zeus of Mythology was a king who seized power through conquest. Nobody voted for him, so nobody can vote him out of office. He can’t be impeached. Though there are many more facets to the King of Olympus’s personality the ones that are the most jarring  and memorable are his reprehensible activities. Take a character who is the quintessential king and is defined by his authoritarian power, and his sexual deviance and pitch him to a modern audience, there are really few other options. Zeus becomes an obstacle to overcome, an enemy to defeat, a king to overthrow.

The cliche of destroying Zeus Panhellenios is an extension of the changing notion of the divine right of kings, and the psychological drive to rebel against unjust authority.

Now for a little a little metatextual bonus:

The story of Athena says that Zeus took the Titaness Metis as a lover. When he found out from the fates that the any child she bore him would cause his 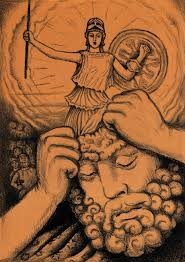 downfall, he tricked her and devoured her. Metis would forever live on in his head as a source of wisdom and knowledge. Some time later Athena was born fully grown out of Zeus’s head. A logical assumption is that Athena is Metis’s child carried to term inside of the king’s skull. Athena would go on to become the goddess of wisdom, warfare, and strategy. She was a patron goddess of the Grecian city state Athens, where democracy was invented. Some stories will even say that Athena gave democracy to the ancient Athenians. Democracy and principles of self governance are what lead to the ideas promoted by the enlightenment, particularly that of a social contract. This modern idea of a ruler being accountable to the people is what caused the idea of a Zeus like king to be rejected in the modernity. Now the king of the Gods continues to be slain in pop culture. It may have taken some time but the fates prediction came to pass. Athena was the godess of strategy for a reason after all.