Home » Articles » The Return of the Quantum Fluctuator 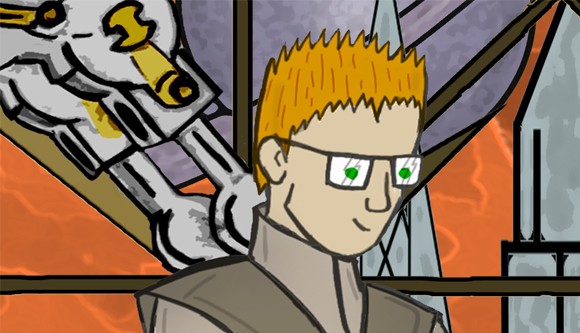 The title of this article sounds like an old sci-fi flick from the 1970’s… Hmmm. Good.

A major feature of my blog since I started, was my webcomic the sci-fi webcomic: The Quantum Fluctuator. The comic stars Dr. Albert Becker, a brilliant boy genius who invents time travel.  Aided by his automated robot assistant Thursday, the unlikely hero has to use his time machine as a method of rebuilding his Earth after the end of the world.

I’ve always loved comic books and have wanted to make one since I young. Though my first love is writing, I greatly enjoyed drawing two. I first made the decision to create this webcomic when I decided to self publish my Liquid Silver stories. My idea was that if I could create a blog and comic book it would be a great way to promote my upcoming novel. Albert and Liquid Silver both share a continuity. Albert will become an important secondary character in the Superhero’s Log, and Liquid Silver has already cameo-ed in the Quantum Fluctuator. Albert’s world is the possible future of Liquid Silver’s. By playing with sketches, and photo manipulation, I hoped to bring Albert to life. Too bad I greatly underestimated the amount of work that go both creating a webcomic, and a self published novel.

The last time I updated the comic was months ago. What better time to start again than just over a month from the launch of my book?  I promise continued updates until the debut of The Superhero’s Log: the Origins of Liquid Silver.

Like I said Albert and Liquid Silver share a continuity but as a time traveler, is Albert’s future the only future for my heroes?  His world is a dark devastated place.  Albert seems to think that history is immutable, but even though he is smart, the boy genius doesn’t know everything. Maybe there is hope to change the future. This is a lesson that might take the young quantum Fluctuator some time to learn.

Keep tuned for updates and as always thanks for reading!