With 23 days left before the debut of my next novel I start thinking about how I started. The Superhero’s Log: The Origins of Liquid Silver as a project, and obsession was born in my early childhood. I started telling stories at a very young age. If there’s anyone to blame  it’s my mother. She used to start to make up stories before bedtime, or as a way to entertain me on a long car ride. Sometimes she would stop the story just before the end and ask me how I thought It should go. From those humble origins I started making up fantasies. As soon my brothers were old enough to understand what I was talking about I took over story telling duties. 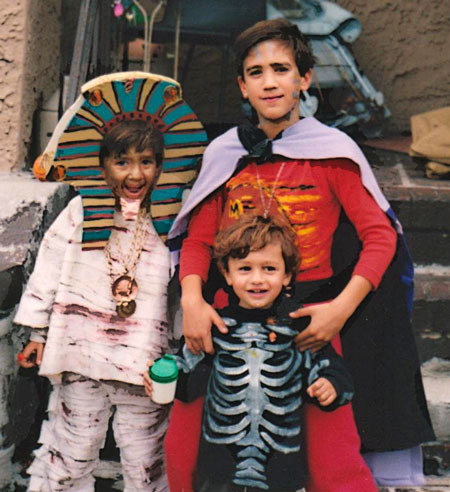 Halloween dressed as Meteor Zan, Liquid Silver’s predecessor in the creative process. (Bonus: my brothers as King Tut and a skeleton.)

I created a character called Meteor Zan for my little brothers. He was a superhero who just so happened to have two super younger brothers as partners. Though the stories started very simply, they quickly carried over into my other imaginative activities. When my friends would play Power Rangers, I would refuse to pick between, red, blue, green, black or white. I thought Power Rangers were lame, and had no story. I insisted that Meteor Zan have a cross over through a dimensional rift to the Rangers’ parallel universe. (I’m lucky I had patient classmates.)

The story first took written form in the fourth grade. The local PTA had an annual creative competition. They called it the “Reflection Contest”. The PTA would announce a theme and students were encouraged to submit some type of artwork. That year the theme was “Discover Your Hidden Talents”. A superhero’s origin always involves discovering new talents. I told how Meteor Zan got his powers. Three brothers find crystals that allow them to fly. The tale was only three pages long. It was hardly the epic I had in mind but it was a start, and what do you know… I won the contest. Not only did I return to the playground to team up with the local power rangers with a new vigor. Meteor Zan may have even showed up at Halloween. I tasted blood and I wanted more.

After surpassing the age where fighting ninjas in the sand  box was socially acceptable, Meteor Zan was relegated to absent minded classroom daydreams, and doodles in the margin of my loose leaf binders. It was fertile territory for creative development. High school could be very boring. As I hit puberty, so did my stories. Meteor Zan became Liquid Silver. His powers changed, and he got villains with slightly more than one dimension, and gasp… a supporting cast with conflict. Very little remained written and what was written down started in the middle without a clear origin. My writing was self important, juvenile, and cheesy. (I’m still waiting for that to change.) So what actually crystallized my resolve to write down my childhood daydreams?  I went to Rome.

But that’s an article for next time…