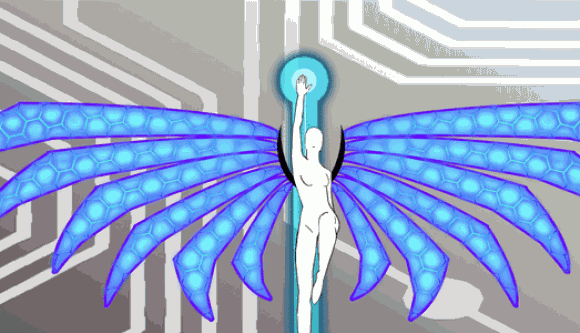 When I designed the back cover of Nova of the Machines, I drew a pair of human hand touching one of the mechanical data cores. The positioning of the hands was done to evoke “The Creation of Adam” in the Sistine Chapel (A bit of artwork I feel privileged to have seen in person). This is one of the most famous depictions of the creation of humanity in history, and I thought it would be a fitting reference in a story about humanity’s creations.

After completing it I didn’t give much more thought to classic artwork until I started drawing illustrations on my Instagram as a lead up to Nova of the Machines release.

These were simple drawings, mostly doodled on post-its to keep me entertained during my lunch break at work. The idea hit me after drawing a machine having its brain inserted on an assembly line. I thought “It can think now.” It reminded me of Rodin’s Thinker. The next picture I drew I made a machine in the same pose.

I’m not comparing my talents to any of those old masters, but I can’t help but draw inspiration from them. If artificial intelligences are a reflection of human why shouldn’t they be represented with some of the same artistic themes? The next up was the Birth of Venus… or Assembly of Venus as it were.

“Assembly of Venus: Complete” after about a week of drawing its done . This is a picture inspired by my upcoming novel Nova of the Machines which will be available May 30th #robot #assembly #machine #mechanical #art #artist #draw #drawing #sketch #SciFi #novel #writing #book #author #selfpublishing

I’m going to keep adding to the gallery of machines emulating classic artwork so keep checking my Instagram and Deviant art for more updates. In the mean time see the rough draft of American Gothic:

“Cybernetic Gothic pt 2” an update of this mornings doodle. The story behind this picture: In the world of the machines some were built to farm. Even after humanity left the planet the machines programed to farm kept doing so as it was all they knew how to do. They use high efficiency agricultural domes to to preserve a piece of the devostated biosphere in the harsh wasteland. I’ll probably edit this picture some more down the road. #robot #farm #farmer #machine #android #gynoid #mechanical #American #gothic #americangothic #sketch #doodle #art #artwork #writing #book #nova #selfpublishing #novaofthemachines #illustration #yafiction Nova of the machines will be available may 30th