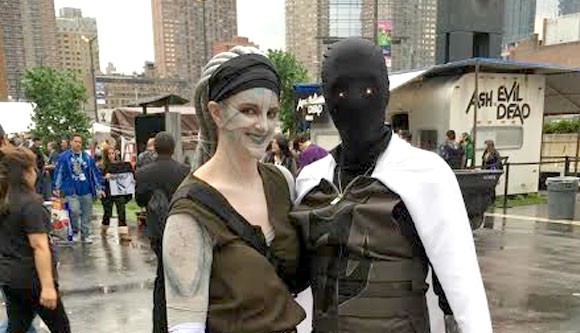 This past weekend was NY Comic Con. I wanted to be an exhibitor but unfortunately didn’t get in, so I tried something I’d never done before. I attend a comic con in costume. My girlfriend Rachel and I dressed as my characters. She as Nova from Nova of the Machines, and me as Liquid Silver from The Superhero’s Log. Of course only a few people would know who we were dressed as, but for everyone else… I had pamphlets. I’ve always admired cosplayers. It’s a hobby that requires a great deal of skill, patients and creativity. Sometimes cosplayers end up making designs better than the characters they were interpreting. Going in costume was definitely a different experience. When random people come up to you to take your picture, they are all smiles. “Oh my god you look great!” “That costume is so cool!” Beyond that people will open up to you about their creative endeavors. I can see why people enjoy this. Cosplay is not a cheap hobby and yet my rough estimate is that one in every two or three people there were in costume.

Years ago, long before I’d met a woman who would excitedly want to join me at comic con in costume, I briefly when on a blind date with another woman who was talking about her comic con experiences. I’ve written about this before, so sorry for the rehash if you’ve heard this one already. At the time I’d never been to a con. When this woman found out that I liked sci-fi, fantasy and comic books she told me she went to cons all the time. At first I thought we might have a bunch in common, at least our taste in entertainment. She told me she enjoyed going in revealing costumes so that awkward nerds would come up to her and bashfully ask to take her picture. She wasn’t into the characters, stories, artwork or design. There was a mean spirited cynicism in the way she used the word nerd and sounded like propaganda out of a men’s rights forum. There’s a good reason we didn’t date after that. When I went to comic con years later I found the truth was 180 degrees and lightyears from what she described. The people in costume whether, dressed provocatively or conservatively put a lot of hard work into their creations. They like having their pictures taken, not because of some juvenile need for attention, or wish to use their sexuality as a weapon to make themselves feel superior, but because their art is being appreciated. It’s the same thing I feel when someone tells me they read and enjoyed one of my books.

To that woman, I had went out with briefly all those years ago, a nerd was a social outcast. Someone who didn’t fit in with the mainstream and thus was something lesser, an ‘other’ to be mocked. I’ve always maintained ‘Nerds grow up to become superheroes or rule the world’. It something my character Liquid Silver expressed many times in the course of his adventures. While writing this article I asked my girlfriend Rachel what is a nerd? She responded at the somewhat loaded question with a smile and a shrug. “I don’t know, someone who’s into nerdy things. There are different kinds of nerds.” And that’s precisely the point. There ARE different kinds of nerds. Walking through the streets of Manhattan dressed as a superhero and a cyborg invited people to talk to us. I met a graphic designer who does corporate design, but in his spare time writes screen plays. I met a photographer who does legal photography, but loves creative photography. I met with several friends at NY Comic Con who are all of an artistic temperament. My one buddy who plays electric base, is writer, and standup comic has to balance those creative passions against earning a living. My other friend who is a skilled artist, and DJ works at the same company as I and has to make time in the 9-5 grind for his hobbies. To me everyone is a nerd. Everyone has something they are into that they love. Everyone has a fantasy they inspires them and drives them to great things. It doesn’t matter if that fantasy is fantasy in the elves and hobbits sense. It could be music, sports, current events, or thousands of other things. Its artistic appreciation bottled and distilled into its most concentrated form. All too often that screen play is left to gather dust, while the creator is struggling to make ends meet.

I think of the modern myth of the superhero. Most of them have a secret identity trying to balance between their ordinary and extraordinary lives. The majority of the drama in stories about Peter Parker is his inability to be both Spider-Man and a normal guy. It’s a struggle to creative and successful, yet at comic con amongst a sea of Deadpools, Harley Quins, and countless characters that to my surprise a nerd of my caliber was unable to name, I found myself inspired. There were also dozens booths all run by small independent creators working to get attention for their projects. They even had a panel to discuss the work of independent creators. Dressing up for comic con showed me that there can be a place in normal life for that out there, fantastic, unstoppable creative drive. For some it’s costumes, for others, its music, artwork or photograph. I have my books and writing. It’s not easy, but very few things that are worth it are. We are all Clark Kent Monday through Friday 9am to 5pm. The rest of the time, I’m going to be Superman.