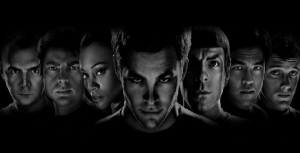 Over the last few days I’ve seen a bunch of rumors springing up on the interwebs surrounding the sequel to 2009’s Star Trek reboot. My gut feeling as soon as the reboot ended was “I want more!” I’m not sure if I’m looking forward to this movie or the Avengers more. I’ll admit with a certain amount of pride that I kept a candle lit that Star Trek would have a triumphant resurrection. Of the Promising rumors is that Star Trek Will be Partially inspired by Cowboys and Aliens.

One of the stock sci-fi tropes that’s been batted around pop culture is the “Mad man with an uber weapon threatens the galaxy.” Khan had the Genesis device in Wrath of Khan. Shinzon had the thalaron radiation generator in Nemesis. Doctor Soren had the star killing Trilitium missile in Generations.  Nero had his black hole generating red matter. In all these movies the plots were very action oriented. The villain threatening the galaxy with his super weapon worked to varying degrees. I feel like its time for something different.  Blending sci-fi and westerns is a fantastic idea to get something fresh while providing a nice call back the the classic stories.

So how is our beloved crew going to encounter cowboys? Let’s put time travel aside for now and look at other ideas. Many of the original  episode of Star Trek involved the crew visiting Earth like worlds at various points in their historic development. Some of these worlds had cultural pollution, where under developed aliens would find out a piece of information about Earth and structure their society around it. This is how we ended up with Nazi planets and gangster planets. Maybe some how an alien world got it hands on the discography of spaghetti westerns.

Other episodes featured planets which resembled Earth without any explanation other than planets with similar conditions develop similarly. This went as far as having a world where Yangs (Yankees) fight comms (Communists) in a cold war.

Another possibility is to have a world where aliens dropped off abducted humans for study. The original series had a planet populated by Native Americans. They were left on this planet by aliens to preserve a culture that was dying on Earth. An episode of Enterprise showed a world where the abductees were cowboys. If they wanted to be stickers for continuity  it could even be the same world.

Now another great rumor I read was that the Klingons would be the enemies. The sequel would draw a distinction between the smooth headed Klingons of TOS and the ridge forheaded Klingons that came there after. Star Trek Enterprise already did a bang up job explaining the difference. Smooth Klingons are afflicted by the augment virus and have human DNA  in them. This makes them sneakier and more devious. Bumpy Klingons are more barbaric but honorable . What if our Klingons needed something on the cowboy planet or simply wanted to concur it. The ridges would want to go to war whereas the smoothies would want to infiltrate it. If the Enterprise crew was exploring  the same planet they would have to protect it. This could lead to a battle between the humans and Klingons. Come on who wouldn’t  to see Kirk get in a western style showdown  with the Klingon commander. Maybe the bumpy Klingons would come to respect the westerners because they live a warriors life style and are governed by a code of honor. It practically writes itself people!

Come on, you know you want to hire me JJ Abrams!